The Future of Cryptocurrency

Given the seemingly national obsession with Bitcoin I’ve had to become more of an expert on the king of digital coin and other cryptocurrencies like Ethereum, Ripple, Litecoin, Tether, and Dogecoin.  Equity investing is the heart of my comfort zone, but my colleague Randy Coleman’s commentary Is It Really Different This Time? last week compelled me into a deeper study of the crypto phenomenon.  Little known is the staggering number of cryptocurrencies in existence.  CoinMarketCap provides quotes for 4,387 cryptos and indicates the total numbers over 7,800.  Truly, there are important digital currency developments that need monitoring.  They may have important tangential investment implications even if you don’t directly trade in the various versions of digital currency.

Proponents tout cryptos as the currency for the future, an alternative to a flawed financial system where excessive money printing increases inflation by decreasing the unit value of money.  While not an exhaustive list, other positives include 1) anonymity – account identities are encrypted, 2) convenience – simply register and set up a digital wallet and you can send or receive payment globally without bank fees and stifling government regulation, 3) democratization – residents in countries with weaker currencies and less disciplined central banks have the means to secure goods and services through a universally accepted means of payment.  (Note: Turkey has the highest cryptocurrency adoption rate), and 4) security – the system runs on blockchain technology where “miners” use computers to execute sophisticated algorithms to create and track digital coins, making theft and counterfeit theoretically impossible.  Basically, you can think of cryptos as the currencies of anarchists with advocates claiming we’re better off with no central banking authority for money supply.

Critiques of this virtual money world are many.  Environmentalists hate the enormous power required to “mine” new cryptocurrencies since they require intensive computer usage to solve complex mathematical formulas to create or maintain a new coin.  Some estimate Bitcoin, by itself, already requires more energy than the country of Ireland.  Cambridge’s Centre for Alternative Finances calculates a single Bitcoin transaction equating to the carbon footprint of 680,000 Visa transactions.  This may propel us closer to climate disaster.  Maybe even a darker side, virtual currency anonymity provides cover from regulatory oversight allowing for illicit activity like money laundering, and untraceable money transfers by organized crime and terrorists.  Finally, as the explosion in the sheer number of cryptos suggests, the idea that they provide better money supply control is a fallacy, since their non-regulated nature means new digital currencies can be created all the time.  Indeed, the popular move at the moment is to create a new crypto, heavily advertise its merits to run up the price, sell your coins, leaving everyone else with losses as it inevitably gets added to the long list of failed cryptos, currently 600 and counting.  Obviously, without government backing, cryptos can and have become worthless. 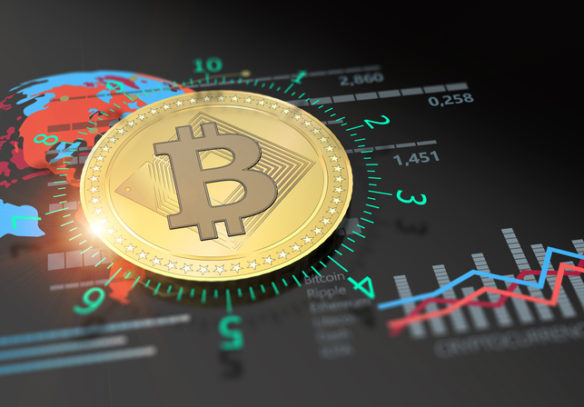 Like it or not, however, cryptos are becoming more pervasive in the marketplace.  Virtual currency trading on the top 100 crypto exchanges in dollar terms now exceeds $295 billion per day, far below the estimated $7 trillion in traditional currencies, but growing exponentially.  Retail Bitcoin wallets, or those accounts with a balance of less than $1000, number over 31 million globally as of October 2020, up 15 times from five years ago.  Mizuho Securities’ survey found 24% of recent U.S. stimulus check recipients plan to use the money to invest in Bitcoin.  Not just a Bitcoin phenomenon, other cryptos are growing faster.  For instance, cryptocurrency Ethereum transactions totaled more than one million a day at the end of December 2020, more than six times Bitcoin.  Cryptos Stellar and Ripple lead the digital currency daily transaction table with Stellar recently reaching 5.6 million transactions per day, or six times daily activity two months earlier.  Further, the phenomenon has moved far beyond just retail speculators.  JP Morgan indicates institutional Bitcoin purchases in the fourth quarter 2020 totaled 307,000 bitcoins, outpacing the 205,000 bitcoins bought by retail investors.  The institutional holders list keeps growing with the much-ballyhooed Tesla purchase, a recent new addition.  Ever looking for ways to make money, Wall Street firms have jumped into the fray providing crypto safekeeping services, exchange-traded funds, and derivative instruments.  The popularity extends beyond investment, as multiple major companies now accept digital currency for goods and services payment.  Examples include Overstock.com which accepts any of four digital coins and many others accepting Bitcoin including Expedia, Subway, PayPal, East Japan Railway, and Microsoft to name a few.  Indeed, the digital currency age appears to be coming fast.

Which brings me to the crux of this commentary.  With pandemic-engendered record levels of monetary stimulus unleashed by central banks around the world, the above discussion illustrates that investors and institutions seek alternative stores of value in these digital assets.  This surging popularity has not been lost on governments and central banks, however, and they’re not interested in losing control of the crucial financial and societal functions of money.  Governments will not allow their central banks to be disintermediated.  No wonder this was a big agenda item at Davos, the World Economic Forum, and, according to the Bank of International Settlements, 65 central banks or 86% of those surveyed are studying a CBDC, or Central Bank Digital Currency, with 14% already moving into development stage.  The study concludes 20% of the world’s population will be under a bank’s digital currency within three years.  Both the U.S. and Europe are contributing greatly in terms of guidance and proposals.  Their task is not easy, but just from the outline being discussed, it’s clear none of the above-mentioned cryptos nor any other private cryptocurrency satisfy the requirements.  For instance, a good currency should be relatively stable, providing a good store of value.  Bitcoin has already suffered declines of more than 70% three times.  It needs to have scale.  Unfortunately, Bitcoin usage for daily transactions is limited with miners able to handle three to seven transactions per second compared to 24,000 for Visa.  Other criteria include it being government backed and trusted with a robust legal framework for its issuance and use.  It has to have universal acceptance, and the infrastructure to allow for payment even with the Internet down.  It needs to have mechanisms to combat money laundering and other nefarious activities.  Clearly, private cryptocurrencies do not satisfy many of these criteria.  Thus, they are not really currencies at all, but just digital assets with dubious intrinsic value.

In summary, private cryptocurrencies’ contribution to the financial world should not be discounted.  They’ve shown there is a tremendous appetite for digital forms of exchange and the use of the digital public ledger provides a technology blueprint for central banks to follow in creating a CBDC.  Government-backed true cryptocurrencies are coming, but the existing private cryptos may not be the currencies of the future without significant improvements to overcome their weaknesses.