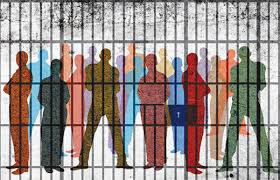 The number of people in prison has climbed sharply for decades sucking people out of the labor force and permanently impairing their ability to obtain jobs even when they leave prison. At the same time, the number of people on disability benefits has also grown very sharply, further reducing the pool of workers available. These trends have gone on for decades and have been a drag on economic growth, but these trends are now, finally, reversing, thereby adding slightly to the economy’s growth potential.

The U.S. has more people per capita in prison than any developed country in the world. We have less than 5 percent of the world’s population, yet almost 25% of the world’s total prison population.  While these people obviously are unable to work, this inability to work extends to when they are released from prison, since the time out of work coupled with a criminal record can make it very hard to find and maintain a job. This hinders U.S. economic growth opportunities. But policies towards incarceration are slowly changing and the prison population is now finally declining.

The number of people on disability has also soared. Today there are almost 9 million people in the US enrolled in disability. In fact, three states still have over 4% of their entire populations on disability, including Kentucky, Mississippi, and West Virginia. Over 2.5% of the entire U.S. population is on paid disability with healthcare. No doubt these programs are vital to help those that need aid. But they have also become tools for abuse and a few physicians and judges developed reputations as rubber stamps for approving disability cases. Since 1983, there has been an increase of over 160% of those on disability, but only a 40% increase in the population rate. After decades of growth, the government has finally begun to make it more difficult to receive these benefits. Over 40% of those who applied in 2003 was awarded the benefit, while today that proportion has fallen to just over 30%. In addition, for those already on disability, the government has been terminating enrollees at the somewhat higher rate of 9%, compared to 7% 15 years ago. Both factors produced a decline in the number of people receiving disability payments. From 2016 to 2017, there were over 100,000 fewer people in current-payment status, a decline of a little over 1%.

Fewer people spending time in prison and on disability has helped contribute to the increase in the labor force participation rate, albeit just modestly. This has provided some marginal slack to the labor force and, perhaps, has slowed wage growth.

In previous commentaries, we discussed the persistent and systemic factors reducing the labor force participation rate, such as the aging baby boom population and the number of people going to school for longer. But other factors, such as those discussed here have reversed. Unfortunately, the largest drag on labor force participation remains the aging population, and this will not reverse any time soon. Without the recent improvements in prison and disability rolls, the labor force participation rate would likely have fallen further. Although recent policy changes have helped to reduce these numbers, we should not expect this source of labor force growth to provide much more of a tailwind to workforce rolls. All of this suggests that we’re not going to see a boon in worker bees to mitigate the decline in the unemployment rate.