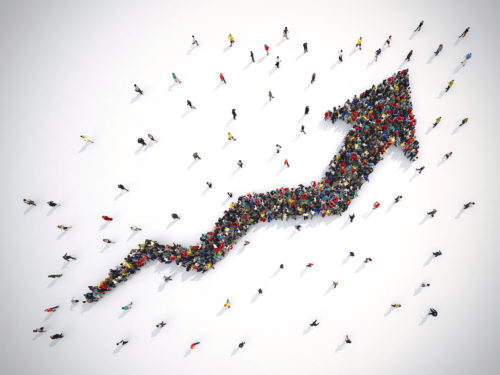 The stock market doesn’t need a reason to go down.  Nonetheless, we remain positive on its prospects for 2020, given that we see little risk of recession, a deal with China on trade, moderate GDP growth, a resumption in growth in corporate profits, still moderate inflation and a Fed likely to keep monetary policy unchanged for the visible future.  Investors can be demanding, but it’s hard to see what else they could wish for.  No doubt, we should assume the market may swoon from time to time.  But the ongoing trend of rising stock prices is likely to remain intact.

The greatest risk to stock prices is always that of recession.  Yet we see nothing but ongoing economic growth (for as far ahead as we can see, which isn’t very far).  The pace of job creation is moderating, which is to be expected when unemployment of 3.5% is at 50-year lows. There are simply fewer unemployed people left to be hired.  And less hiring must also accompany slower economic growth.  Although members of the Administration still hanker for 3% GDP growth, a more realistic range is 2% to 2-1/4%, which is still adequate to drive down unemployment to new lows.  Trade and housing should be meaningful contributors to expansion in 2020, after being drags on growth over recent years.  It may be unrealistic to think that China will really buy an incremental $200 billion in U.S. exports over the next two years, but even half would be a significant addition to U.S. activity.  And it is also clear that low-interest rates are lifting new housing construction, which has lagged badly behind U.S. population increases.

As always, there are reasons for caution.  While the great uncertainties over China and Brexit have been resolved, and the Trump impeachment will also likely resolve soon, there are plenty of risks in the geopolitical environment.  That list would certainly include Iran, North Korea, and even Turkey, an erstwhile ally that seems bent on mischief on its own behalf.  None of these geopolitical problem areas is likely to undermine our expansion, however.

The Fed is seemingly committed to keeping monetary policy highly accommodative as long as inflation remains below its 2% target.  Fortunately, it has chosen the PCE deflator as its formal target, even though all other measures of inflation are already running hotter.  And with the election slated for this coming November, the Fed will strongly prefer to remain out of the headlines by keeping policy unchanged unless the data forces them to act.

All of the above provides a nicely benign environment for stocks to continue higher.  Valuations for most stocks are also reasonable, given the low-inflation environment, so they offer no compelling reason for stocks to move in either direction.  No doubt, there will be some surprises, some of which will grab headlines but won’t mean much for markets.  Others may be more significant and stocks could move sharply in response.  We still expect stocks to work their way higher subject to the typical ebbs and flows.