Investing in the Face of Terrible Events 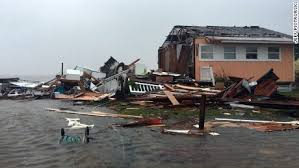 The past week has brought into sharp relief the potential for devastation to be wrought by both natural events and political forces.  Hurricane Harvey’s impact on Houston and the surrounding area will likely rank as the most costly natural disaster in U.S. history, while North Korea’s detonation of its largest nuclear bomb yet reminds the world of the potential havoc that an unleashed Kim Jong-un could wreak in Asia and beyond.   These event risks have been increasingly reflected in investing opportunities in different sectors, but the broader economic implications of the two types of events are very different.

Hurricane Harvey slammed into Texas and stayed in the neighborhood for several days, drenching Houston with upwards of 50 inches of rain in some locales. No doubt some parts of the region will take months or longer to recover. Harvey was atypical as a damaging hurricane since most hurricane damage comes from wind and coastal flooding, while Harvey’s winds were relatively tame.  But in terms of rainfall, Harvey has no historical precedent, and its impact was especially damaging since those rains fell  over the 5th largest metropolitan area in the US.

Hurricane Katrina had been the most expensive insured loss ever with losses almost triple those of Hurricane Sandy. Harvey’s total losses appear likely to surpass $80 billion, but only about 25% of the losses are thought to be insured because of the extensive flooding. Flood insurance, which is offered primarily through the government, is far less common than wind-damage insurance, and many Houstonians had no insurance against the damages of water.  Despite these historically large losses to both insurers and to the individuals directly impacted by the hurricane, the economic impact to the US economy should be relatively small.  There is thought to be considerable excess capital in the casualty insurance business, so the limited insured losses are unlikely to result in any kind of notable rise in insurance premiums and this was properly reflected in those equities last week.

There are estimates that as many as 1,000,000 vehicles were destroyed by the vast flooding during Harvey. If even 600,000 vehicles were destroyed, it would be more than the number destroyed by Hurricane Katrina when 400,000 to 500,000 vehicles needed to be replaced. The impacted area of Houston is about 5 times larger than New Orleans and the flooding may have been worse. While we can estimate the replacement cost of these vehicles, about half still end up being sold to unsuspecting buyers unaware of the flood damage to those vehicles, complicating the true economic cost. Additionally, 15% of Texas motorists are uninsured, despite a legal requirement to maintain insurance protection.  It’s less clear what these motorists will do since they may also face other costly home repairs. In all, losses from vehicles could approach $10B alone. But the number of vehicles that will be replaced is sizable relative to the 17 million annual U.S. selling rate and should quickly eliminate any excess inventories currently held by the auto manufacturers.  It will also clear out any excess inventory held by rental car companies.  Auto manufacturers and rental company stocks have already reacted to the change in business prospects.

Estimates of the impact of Harvey on GDP are based on previous storms, and historically a major hurricane has a modest negative impact on US GDP for one to two quarters before consumer buying and construction kicks into gear boosting GDP for several additional quarters above the rate that the economy would have otherwise grown.  The 3rd and 4th quarter of US GDP may be reduced by 0.2% – 0.3% with the subsequent two quarters rising by similar amounts. Thus the GDP impact of Hurricane Harvey won’t be more than a few ticks in either direction. Inflation may also be modestly impacted but not in any way that would materially impact the Federal Reserve’s trajectory on interest rates.

On the political front, North Korea launched its sixth and most powerful nuclear test over the weekend, prompting growing concerns that a military confrontation lies in the near future. This is an incredibly complex geopolitical concern. If the US and the world remain content only to impose economic sanctions, North Korea’s military capabilities may grow undeterred. This seems like the most likely outcome as both Japan and South Korea continue to favor dialogue over military confrontation.

If this is the path ahead, there are other problems that may form from North Korea’s military rise.  Kim Jong-un is well known for selling weapons technology on the black market in order to fund some of his military’s growth. An undeterred North Korea poses an additional threat through further arms proliferation.   Even beyond that serious risk, if North Korea were able to successfully stymie the rest of the world through its growing nuclear arsenal, it would signal to other regimes that becoming a nuclear power would be an effective strategy for a hostile regime to maintain power. Saddam Hussein and Muammar Gaddafi may very well have chosen more dangerous strategies if they had witnessed North Korea successfully navigating this path.

Yet other solutions to resolve this crisis use a military option and this places at risk hundreds of thousands or even millions of lives. Complicating this option further is that China has stated that “’if the US and South Korea carry out strikes and try to overthrow the North Korean regime and change the political pattern of the Korean Peninsula, China will prevent them from doing so.” This may or may not prove to be true, despite the public statement and China’s defense agreement with North Korea.

Perhaps the riskiest strategy of all would be to target Kim Jong-un specifically, but this carries a very high degree of risk since we cannot know whether an automatic military response would be triggered, nor who would succeed him. There may be no good outcome for any of these choices and certainly none with any high level of certainty.

There are a myriad of other possible outcomes ranging from Kim Jong-un being removed from within his own regime to China supporting the U.S. in a military strike. Perhaps Kim Jong-un will attack first. Unfortunately for now, this situation may get worse before it gets better and we’re a long way from any improvement.

From an investment perspective, North Korea’s actions do not yet warrant any considerable change, but the market is likely to experience increased volatility as each missile test provokes the West yet again. In the past, these missile tests and related bravado have all appeared to be chest thumping and non-genuine. The market has historically understood this.  But the thumping is growing louder and the tools of destruction more threatening, so the situation keeps uncertainty high.

There has been no indication that the US is building up a military force in the region to initiate an attack.  Even if an attack were to happen on South Korea, as horrible as it may be on a human level, the economic impact would probably be small worldwide, even if markets did sell off. Equities may sell off, but this would more likely be a buying opportunity since any military action would likely bring about the end to Kim Jong-un’s regime, despite the human atrocities. Nonetheless, this part of the world warrants following very closely and is likely to be a leading source of volatility over the next 12 months.